Posted by Erin Gebbia at 9:20 PM No comments:

Posted by Erin Gebbia at 9:49 AM No comments:

The Initial Idea
I can't really say where my ideas come from. I'm usually either bored sitting in class or doodling new animals. Often, I get attached to them, and on drawing them more and more, I decide that they need to stick around. The first process I go through is designing the character.

Design Development
Greg and Lukas have gone through the biggest design changes, both in markings and shape.


Names
During the process of designing a character, I give my characters a name. I like when names match the character's physical appearance or have a certain ring to it that people will easily associate with the personality I want my character to have.
Deciding on names is tricky. There are either of two ways you could go: meaningful or memorable. I usually go with memorable because I'm a sucker for the things that actually make names memorable, like alliteration and putting the stress on the first syllable (CASSie, LUkas, APril, JAson). Short names also seem to be more memorable, too (Greg).


Personality
In my opinion, a cool looking character is wasted if it's not given an equally interesting personality. Without a solid personality, you'll have nothing to draw but boring head-shots. Wouldn't you rather be drawing your character expressing its personality in more interesting ways by acting and reacting to your other characters? I would.
The sad part is that it's sometimes way easier to design a pretty character than give it a personality. When I first start developing my character's personality, I think about what purpose the character will serve. Do I want them to be funny, mean, snobbish? Making a list of traits helps me decide which characteristics I want to emphasize or completely discard in the initial phase of personality-planning.
I also try to make my character's appearances match their personality. This step kind of happens during my 'design development' process. Consequently, Lukas is usually drawn grumpy, because, well, that's part of his personality. Speech patterns go hand in hand with personality. The speech of a grumpy character, for example, can either be short and clipped in agitation, or long and ranting. You could even through in a passive-aggressive flavor.
Most importantly, I research the animal I've drawn. Finding out interesting things about the animal helps me give interesting personality quirks to my characters.
For example, consider April Opossum. 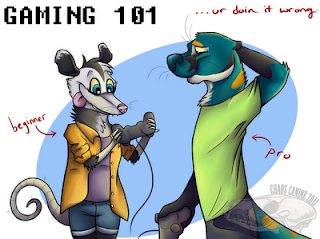 Honestly, the picture above is the first time I ever drew her. Her only traits were that she was a little silly and easily confused. I really wanted to develop her personality more, however, so I looked up some info on her species.
In addition to that, I took some common stereotypes of opossums and gave her a similar yet twisted version of those traits: Because opossums are usually seen as 'southern trailer-trash vermin', April is instead from a wealthy southern family who owns a plantation; Because opossums are known for 'playing dead', I decided she would be both a theater enthusiast and aspiring (yet unknowingly bad) actress.
Or, you could give your character the complete opposite traits of it's stereotype, like a cowardly lion or killer rabbit. That would give you double irony points.


Interactions
A character's personality dictates the interactions it will have with other characters.  I've drawn Greg and Lukas interacting the most; their love-hate relationship amuses me so.  Determining these reactions takes some planning of your character's behaviors. Even little things like nervous ticks, habits, and the amount of change the character keeps in their pockets can help display and strengthen character traits.  I tend to let my characters run wild in my head, so I find out these little things about them, and at the same time, come up with little stories and tidbits of interactions that I could illustrate.


In Closing - Upcoming New Characters
I'm creating all the time, and sometimes possible characters get pushed to the back burner because I can't decide on a suitable personality to fit the design.  You may or may not see these guys again, but I really love bison and Malaysian sun bears...
Posted by Erin Gebbia at 9:56 PM No comments: