Quote from an episode of "Avatar: The Last Airbender." Animated in Adobe After Effects.
*Please watch in 720p HD* 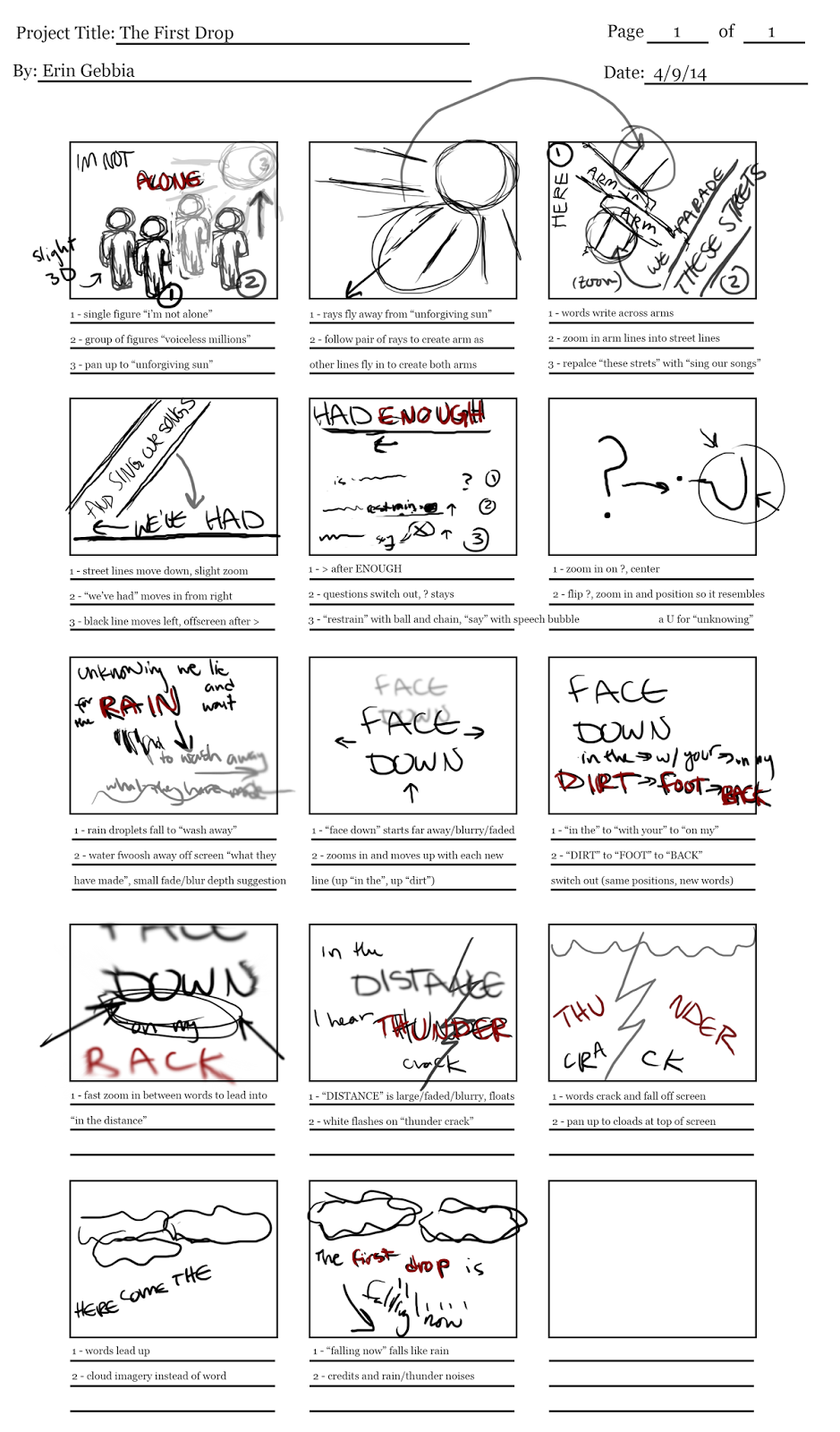 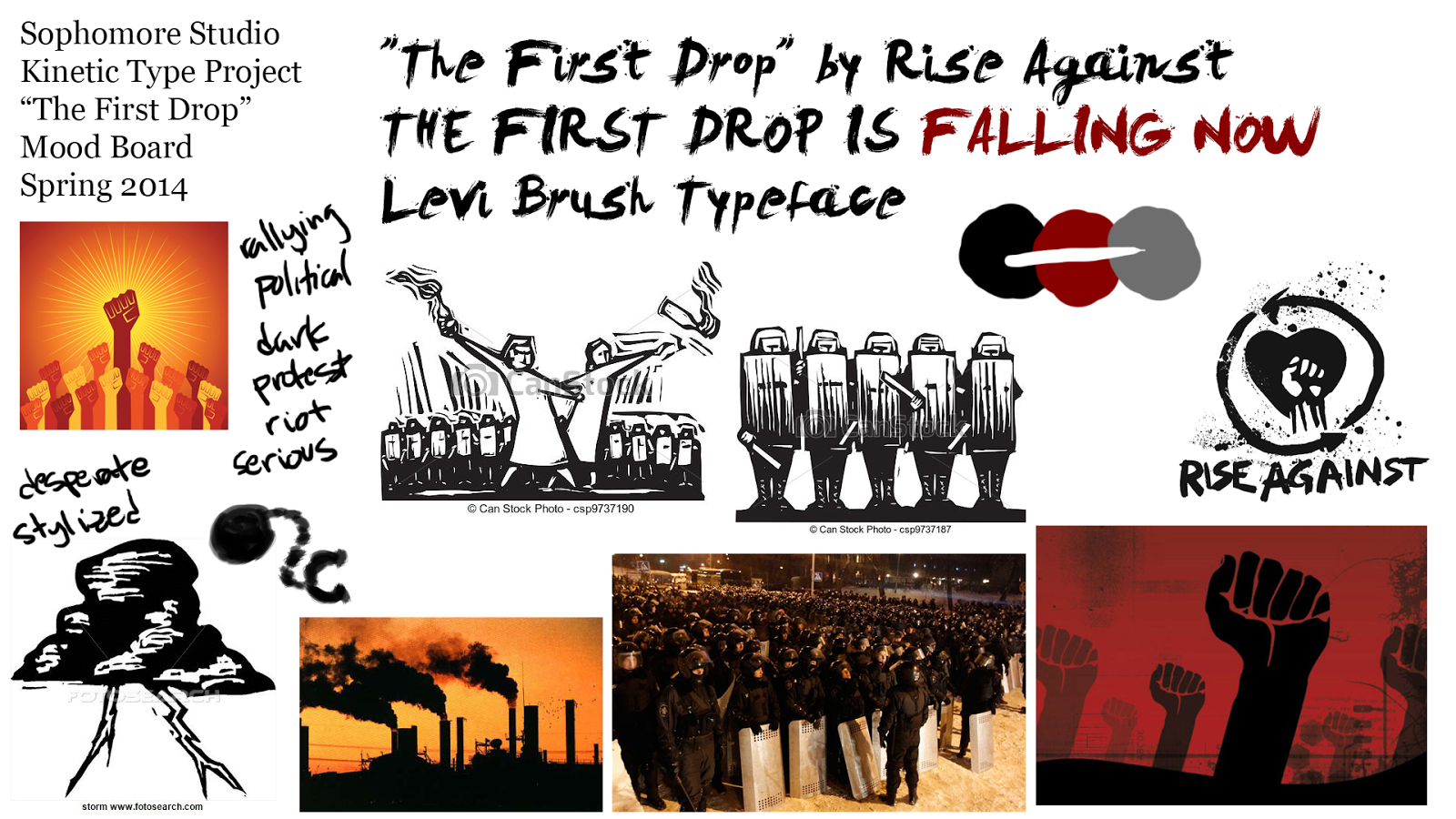 
Animatic for my final kinetic type project. Lyrics from Rise Against's "The Last Drop", written by Tim McIlrath. Drawn in Adobe Photoshop and animated in Adobe After Effects.
*Please watch in 720p HD*

"The First Drop" Kinetic Type Animation. Lyrics for "The First Drop" by Tim McIlrath of Rise Against. Sound effects from FreeSound.org. Illustrations drawn in Adobe Illustrator, and animated in Adobe After Effects.
*Please watch in 720p HD*
Posted by Erin Gebbia at 11:45 AM No comments:

Story:
-Once upon a time, there were two coyote brothers who lived a life of debauchery, thievery, and banditry. They were the most dangerous, most wanted duo of outlaws in the Old West.  The older brother was known as Jack “Black Jack” Hardin; he earned this moniker cheating his way to the top of card games across the West and going on notorious drunken shooting sprees if he lost. The younger brother was known as Cassidy “Crafty Cassidy” Hardin; rather than utilizing brute force like Jack, Crafty Cassidy was much better at being sneaky, sly, and persuasive in order to get him and his brother out of trouble, though he was still given to drinking and becoming reckless.

-Every day, they roamed the plains, robbed stage coaches, hitch hiked on trains, stole, killed recklessly, got in fights and frequented saloons for drinking, gambling, and other unsavory business.
-One day, Black Jack decided to rob a train carrying a significant amount of wealthy upper class travelers.  While holding some victims at gunpoint, Crafty Cassidy encountered an elegant young lady jackrabbit.  Entranced by her beauty, he immediately decided to hold her hostage for ransom.
-Because of that, they were forced to carry around Jane the jackrabbit, who complained endlessly, got in the way, and caused them problems in general during their heists and daily life.  Being the smooth talker that he was, Cassidy began to sweet talk Jane, solely to use her.  Slowly, however, they got closer.  She started talking to him, and although she was willing to join his life of crime, she tried to convince him to give up his outlaw ways.  Crafty Cassidy began to wonder if he should continue working with his brother. However, he had been so loyal to his brother for so long that he suffered a lot of internal conflict.  Tension rises between the brothers.
-Because of that, Black Jack began to feel bitter, and the brothers got into a fight during a high tension moment when they had been trying to work together on a robbery.  Assorted adventures and fight scenes ensue.  It is revealed that Jane has been secretly plotting to turn in the brothers for their bounty.  The trio end up in a three-way standoff with guns pointed at each other, but instead find themselves surrounded by the official police forces Jane had sent. All three are jailed, because Jane is viewed as their accomplice from the last couple weeks.
-Finally, Crafty Cassidy is able to sweet talk the trio out of jail, and along with Black Jack’s brute force gunmanship, and Jane’s surprise swiftness with a knife, they are able to escape.  As time passes, Cassidy is able to talk and bribe his way into power, and uses that power to become a corrupt mayor, allowing his brother to continue crime, staying in the outlaw scene himself, and pleasing Jane all at once.

Birthplace: In an Old West mining town
Age at the time of the beginning of the story: 19
What his parents do for a living: Mother – part time prostitute, part time housewife; Father – attempted gold miner, full time gambler and drinker
Relationship with parents: Mother – tried to care for them, but was often absent; Father – abusive drunk, now dead (fell drunk down a mine shaft)
Relationship with siblings: Has always idolized his older brother Jack (22), eager to please him but is often used, very rarely has feelings of bitterness from being second in command, works well with his brother, is good at appeasing Jack’s shorter temper
Early life and school years: Spent younger years running around getting into trouble with Jack, experienced a lot of violence and debauchery among the miners/hooligans/outlaws in town, did not attend school at all, learned to be both thick-skinned and persuasive to survive rough atmosphere
Characteristics: Mischievous, extrovert, sneaky, sly, persuasive, good talker, prone to recklessness when drinking, talkative, selfish but loyal to his brother, liar, cheater
Occupation and evolution of professional life: Tried to work in a local saloon but spent all his
time there drinking and gambling, lead to him teaming up with Jack to become outlaws at age 19, initially to help support mother, quickly devolved into just supporting themselves and their bad habits

Relationship with boss and co-workers: Idolizes Jack, eager to please him, often saves them
from bad situations with his smooth talking, sometimes bitter that Jack gets most of the credit in their thieving duo

Dreams and goals: Live comfortably, be rich, gamble and drink, take care of his mother, survive
Travel experiences: Wandering around the plains and desert either on foot or in train cars
without paying, frequenting various towns and saloons

Political and religious views: Thinks the law is annoying, and that marshals are
lazy/useless/overpaid; “If there is a god, he ain’t lookin’ out fer me.”

Idiosyncrasies: Walks at a quick anxious pace, laughs loud and easily especially at dirty jokes,
impatient, has lots of fleas and itches/twitches his ear a lot

Physical description: Coyote, tall, underfed, lanky, scruffy, beat up, off-balance, mismatched
clothes that are too big for him

General description of living situation: Dilapidated house, poor, minimal comforts, migrant,
wandering, unstable, in the dirt on the ground under the stars with a campfire, different place every night 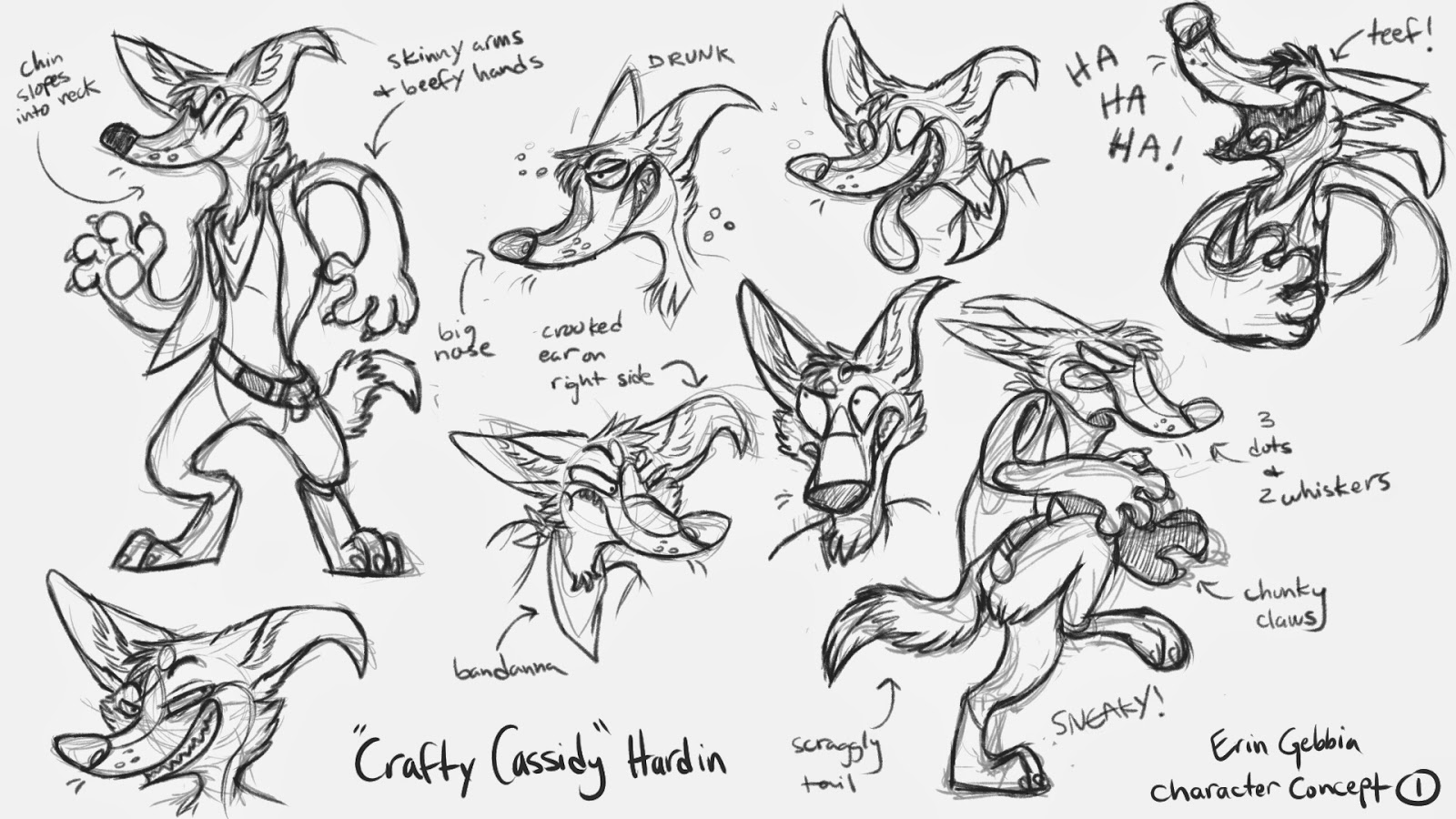 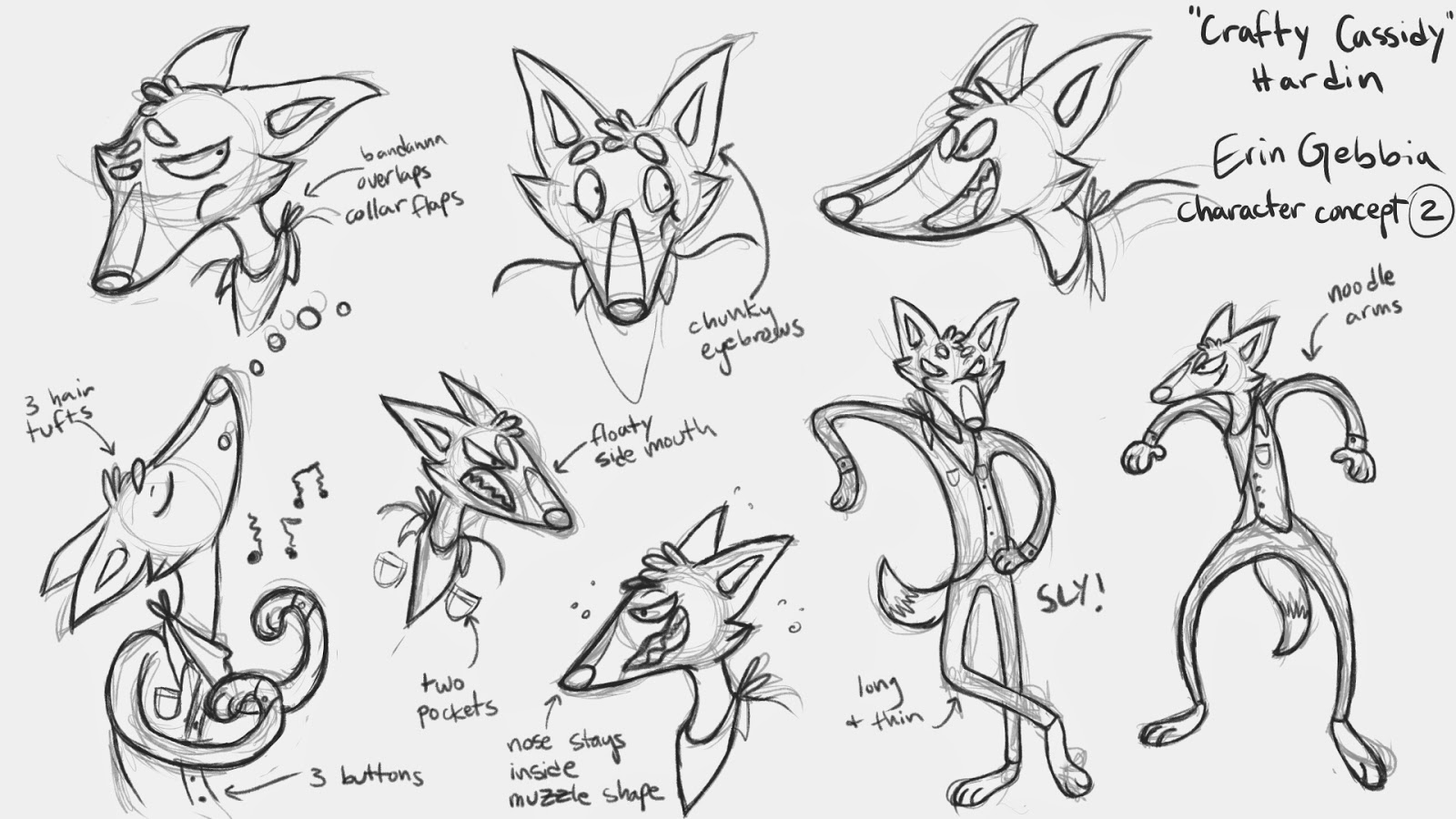 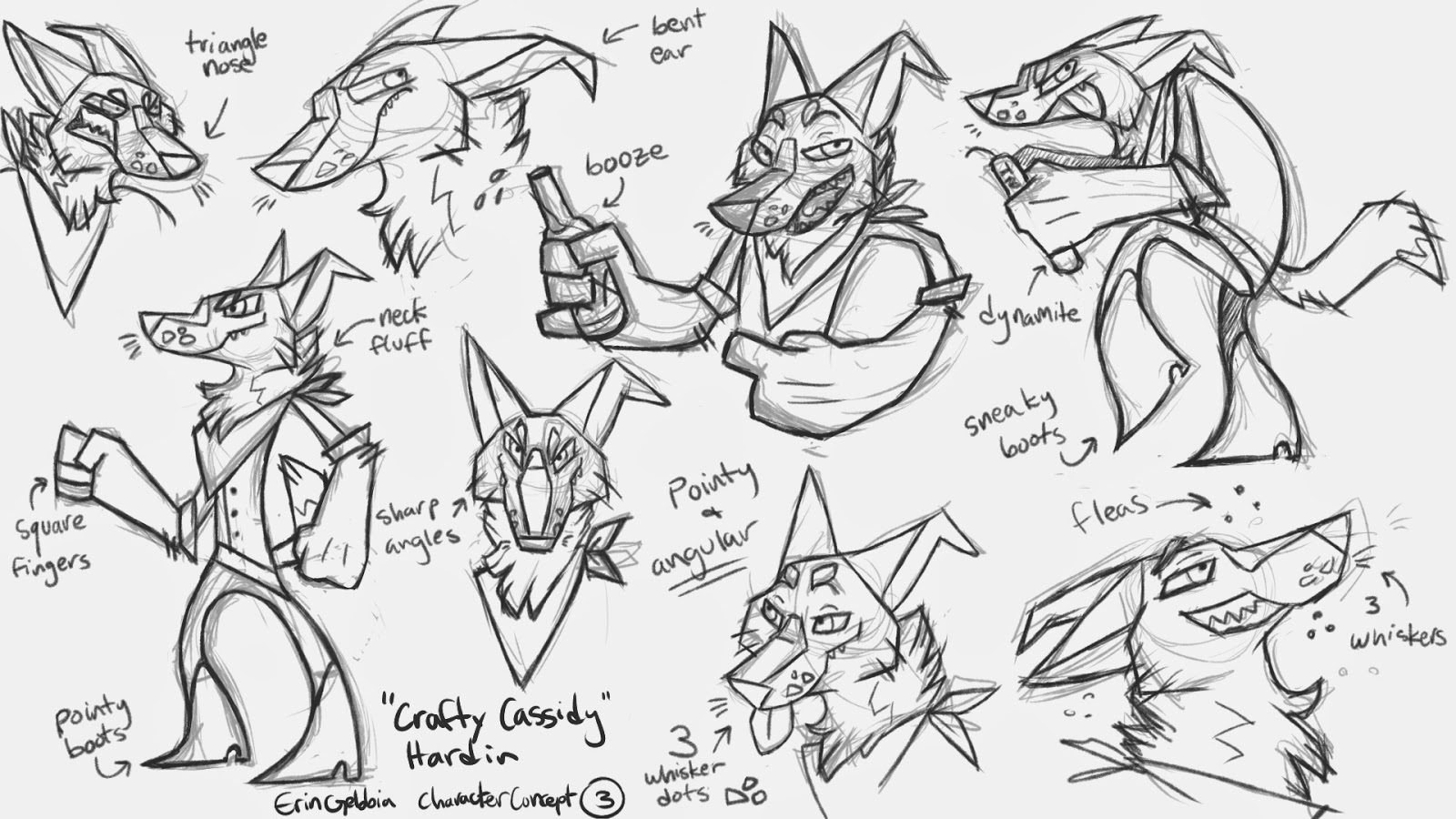 
Final animation for my character "Crafty Cassidy" Hardin's sneaky walk. The walk is supposed to portray an aspect of the character's personality. 24 frames at 12 fps. Drawn and animated in Photoshop.
*Please watch in 1440p HD*
Posted by Erin Gebbia at 5:04 PM No comments: 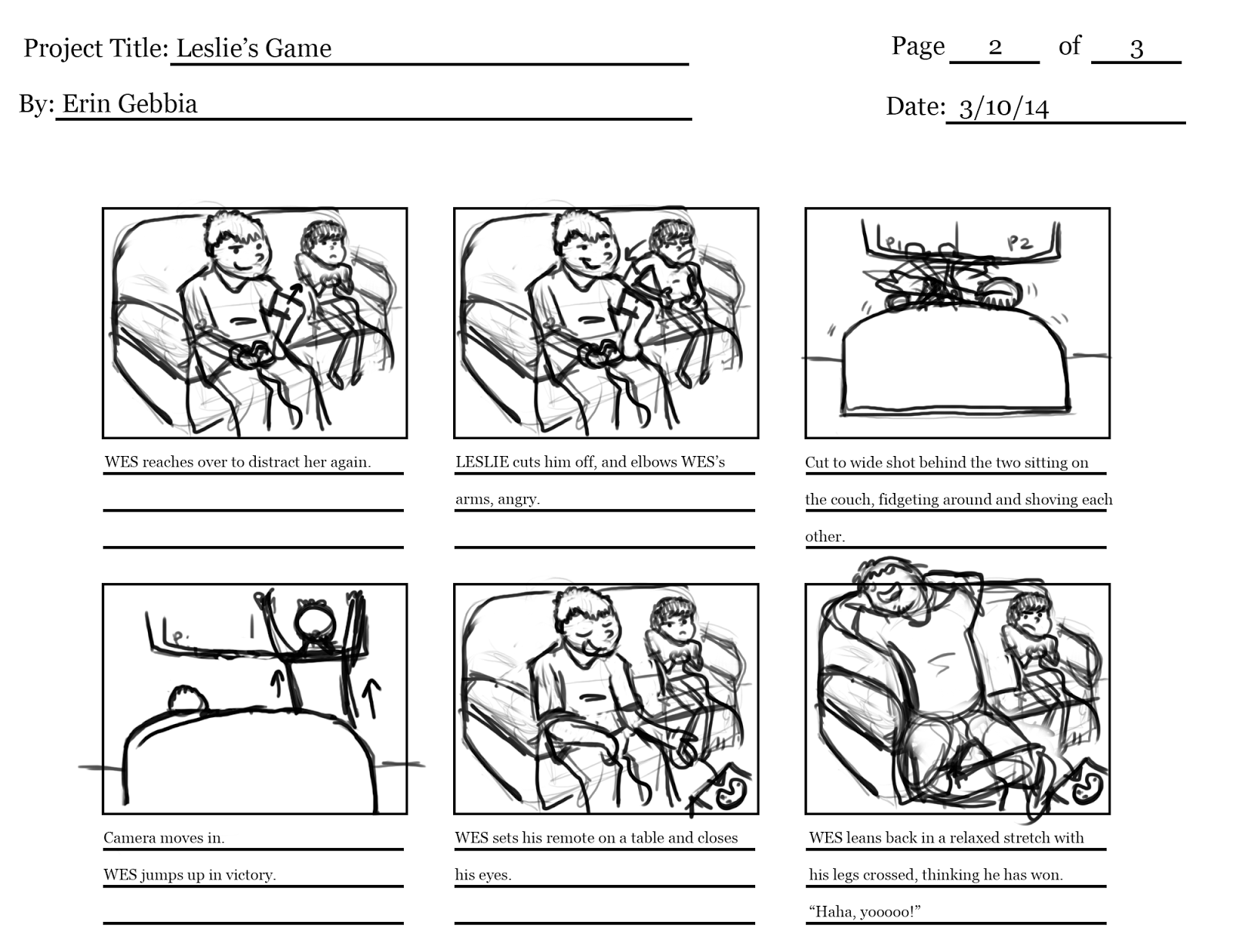 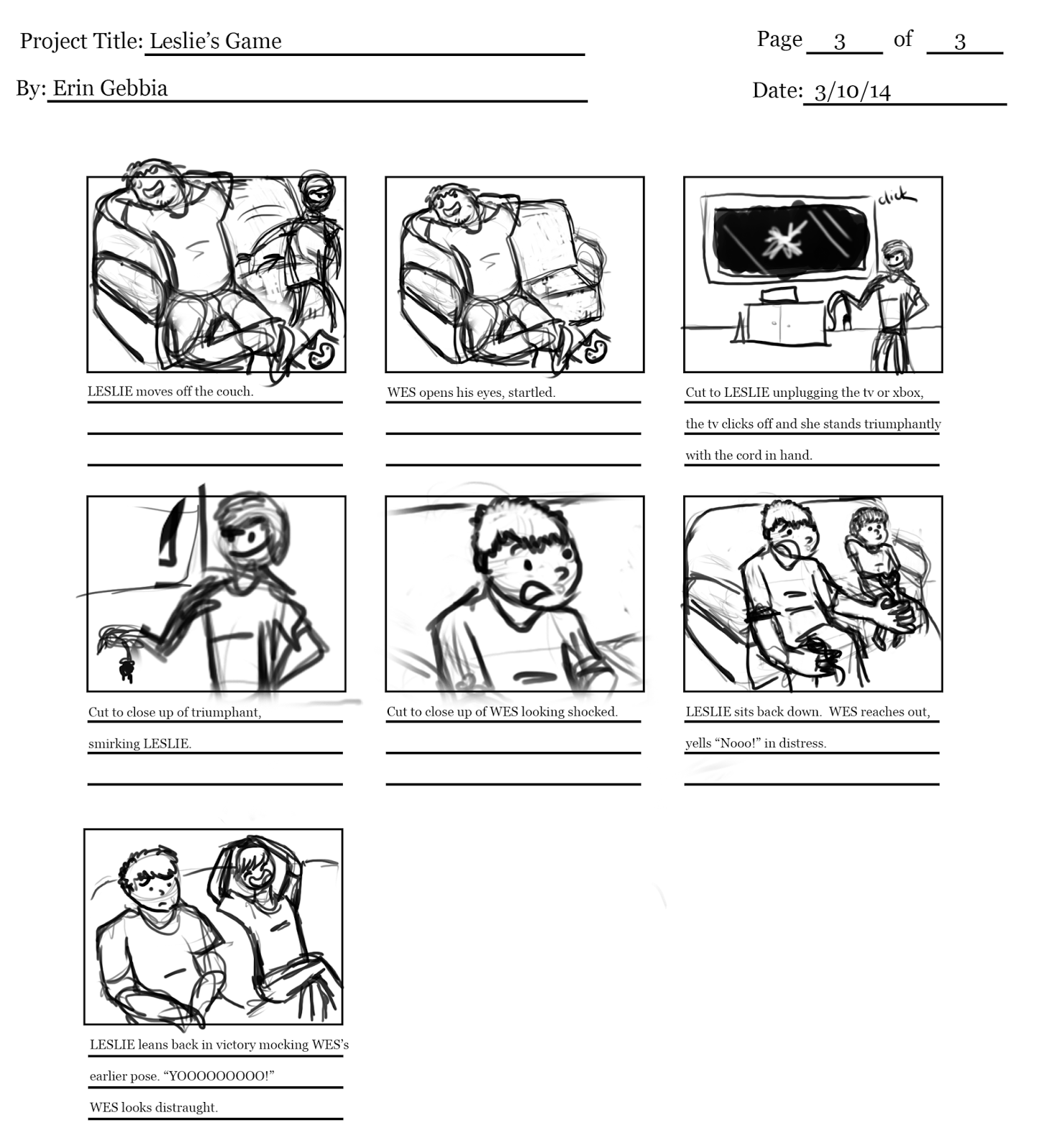 
Rotoscoping in animation is a technique in which animators trace over film or video footage in order to simulate motion.
ADN319 Intro to Animation Rotoscope short animation project "Westlee's Game," based loosely on Pixar's "Geri's Game."
*Please watch in 1080p HD*
Posted by Erin Gebbia at 7:44 PM No comments: